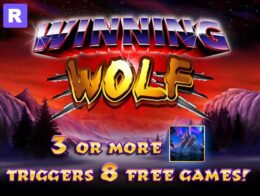 Launched in 2013 by the Ainsworth brand, the Mustang Money slot is a thrilling 5-reel game that harks back to the days of the American West. Packed with 100 paylines and a lucrative free spins bonus, it’s also a mid-variance slot that delivers relatively frequent and sizeable base game wins. Interestingly, this online game is also based on the highly successful land-based slot machine, which is central to Ainsworth’s offline library and wildly popular in the UK and the US. Stick until the end of the Mustang Money slot review to find out everything about it.

This is also one of several Wild West-themed games on the market, so we’ve prepared our own Mustang Money slot review to help you learn more and make an informed decision when browsing at online casinos. As a part of this, we’ll consider the details of the gameplay such as its RTP rate and the top base game prizes, while also appraising the quality of the free spins bonus and whether or not the title offers value for your hard-earned bankroll.

How to play Mustang Money Slot

As we’ve already said, there’s one thing that makes the matrix of the Mustang Money slot unusual. That’s the number of paylines – 100. Yet, you can lower this number at any time. The layout is classic – 5×3. Before hitting the big red Spin button, players might want to alter the size of their bet. There are many options when it comes to the size of bets, but the lowest value that you can choose for your line bet is 0.01 while the highest is 10000. This means that if you are playing with 100 lines and you are using the highest bet, the total bet will be worth €10.000, a good option for high rollers.

Keep in mind that you can choose up to 100 auto-play games by clicking on the Auto button above the Spin button. You can limit the loss and wins while using this feature if you want to. Right under the matrix, you will see two blue buttons – a speaker that controls the sound effects and an “i” that provides information about the game.

This Ainsworth pokie machine accommodates low and high rollers chasing its winnings with stakes as low as 0.01 credits and as high as 10,000. The 100 bet lines used to trigger wins can be adjusted, and so is the value they hold. The final wager is displayed in the “TOTAL BET” field. Once the “SPIN” or “AUTO” buttons set the grid in motion, the grid reveals fifteen new icons that pay if three to five of a kind fall on a payline from the left.

The paytable for the maximum bet is as follows:

Mustang Money slot game has other payout features lined up, including;

The flaming horse plays the wild in Mustang Money pokie machine. The character can only land on the third to fifth reels in the main game and free spins. The horse cannot create combinations of its own.

The Mustang Money slot logo depicts the scatter, making it irreplaceable by the wild horse. The character can pay despite its grid position as long as three or more are in view. Punters receive up to 20,000, 100,000, and 1,000,000 credits for landing three, four, and five of these characters.

The Mustang Money scatters are also linked to the free spins bonus. Three or more items trigger ten free games that play with the same value as the triggering spin. The free spins add a coin wild to the list of icons on the second and fourth reels. A coin wild on reel two displays 1x and 2x multipliers applied to any combinations it completes—the same wilds on reel four display 1x and 5x multipliers. If a single cluster has two wilds, their values are multiplied with each other and then applied to the payout. If three or more slot logos appear, they add five freebies.

Where can I play Mustang Money?

As we’ve previously touched on, Mustang Money is available at many of the World’s leading online casinos. These include Klasino, Casimba, Wizard Slots and many more!

Does Mustang Money come with a special bonus round?

The short answer is yes, as the game has a single free spins bonus that’s triggered when you land three of the logo scatter symbols anywhere across the reels. This will reward you with at least 10 free spins and multipliers of up to 10x your stake.

What is the Mustang Money software developer?

Mustang Money has been designed and developed by Ainsworth, which has a large library of online slots and initially made its name in the creation of land-based slot machines across the globe.