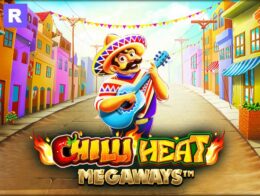 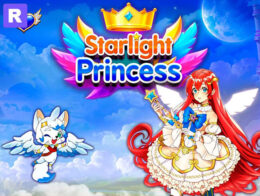 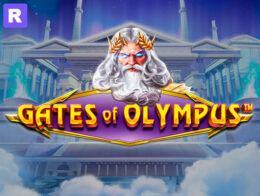 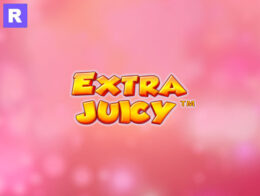 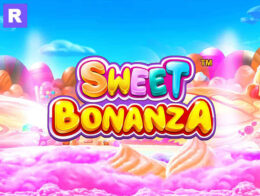 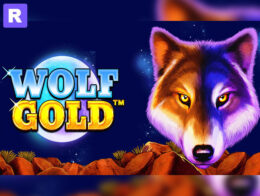 Wild Beach Party, a Pragmatic Play upcoming slot, is giving the player a pretty good reason to check it out, through the mix of sexy Anime girls and tropical beach locations that influence its design. It’s well-drawn, and it definitely tries to be appealing to men in particular.

You will find 7×7 reels inside, and the way to get wins is by forming clusters of matching symbols. Expect high volatility from it, but the rewards of up to 5,000x and the 96.53% RTP could still make it an acceptable choice. Along the way, there will be a series of features that could trigger, such as Tumbles, multiplier wilds, scatters, and free spins. 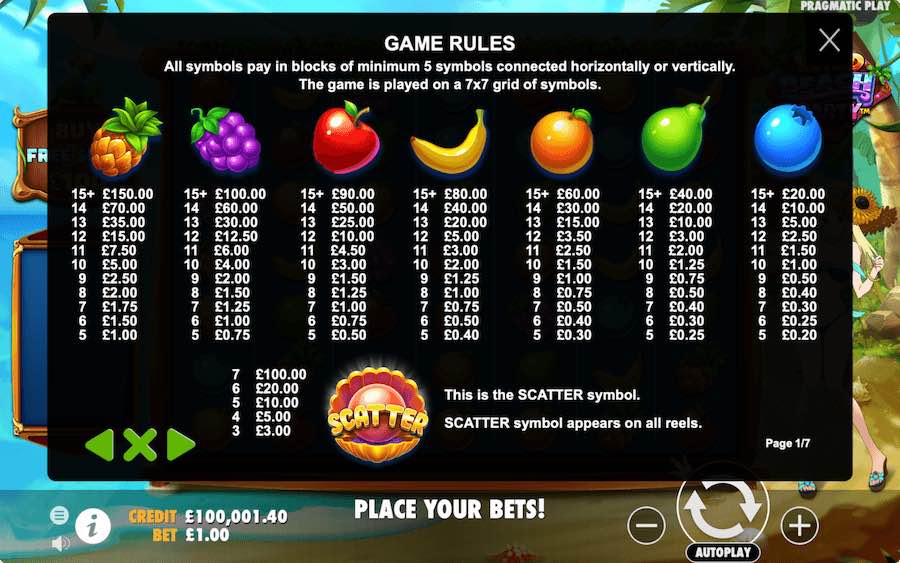 The theme that is easily noticeable in this slot is a vacation to the beach. With a girl in her favorite bikini at the right-hand side of the reels, this theme is further explored. If you would like to play a similar game, then there is the Hot Party Deluxe release from Wazdan to try out. Graphics and animations have always been something that Pragmatic Play has been great with, and that much is proved with the Wild Beach Party online slot. A beach hut can be seen to the right of the reels behind the dancing bikini babe, while to the left of the reels is the crystal blue sea. And for a more tropical feel, the soundtrack predominantly features steelpan drums being played.

The symbols that you will find upon the reels of this slot come in the shape of different tropical fruits. They tie in well with the base theme, as what else would you expect to find when you’re visiting a tropical island beach? There are seven fruits altogether, starting with the addition of the blueberry. The pear is next and then the orange, while the banana follows on in line. It is the red apple which can be seen next in line. Yet the bunch of grapes and then the pineapple are the two that make up the premium symbols in Wild Beach Party. These symbols can pay out up to 100x and 150x your stake at a maximum.

Of course, when playing this slot, you need to be using a proper and appropriate bet in each round. To change this, you can simply click on the + and – buttons at either side of the spin button. This allows you to adjust the Bet, Coin Value and/or Total Bet to your liking. Between €0.20 and €100 per spin can be selected in this area. It is ideal to remember that the game comes with an RTP rate of 96.53% when deciding upon your preferred wager.

The base game of this slot is made up of a grid featuring seven reels. It is also seven rows large, but there are no paylines active across this interface. Instead, when you spin the reels, you need to bring together clusters of the same symbol to create winning combinations. At least five identical symbols must be present in a cluster, and these can be anywhere as long as they link up to another of the same symbol vertically or horizontally.

The scatter symbol is represented by the pearl inside the oyster. Whenever this one shows up, it will provide a payout as long as three or more of them can be seen. These don’t need to be active within a cluster to provide that reward either, so you can benefit from a payout of up to 100x your bet wherever this symbol appears.

This feature becomes active after every winning cluster that you create. Once it triggers, all of the symbols included in a win disappear and gaps are left for new symbols to drop down from the top into. Should you form another winning cluster at this point, the tumble feature hits again, and this continues to happen until no further wins can be created after a tumble.

Whenever a cluster of symbols hits and then disappears, it can randomly leave behind a wild symbol, and this can show up in any random empty spot. The wild will substitute for all other symbols, assisting you with forming winning combinations. Scatters are exempt from this substitution function. Whenever this symbol first appears, it features a multiplier of 2x, and this applies itself to wins of future clusters on a tumble.

The wild can then randomly appear again after a cluster forms and explodes. If it comes back, it carries a multiplier of up between 4x and 256x, with the amount increasing progressively each subsequent time it reappears. More than one wild symbol being a part of a cluster will multiply their values together.

The scatter symbol that was mentioned before is also responsible for triggering the slot’s free spins round. It takes at least three of these showing up to activate the feature. You’ll get between 10 and 25 free spins awarded to you, depending upon the number of scatters in view. The random wild multiplier feature remains active throughout, except when it first hits, it carries a 3x multiplier. It can then increase up to a maximum of 729x through subsequent free spins tumbles.

A beautiful tropical beach acts as the setting for Wild Beach Party. You see a hut on one side, with surfboards next to it, and the beautiful light blue water of the ocean looking as inviting as ever. The unusual side comes from the main character, an Anime girl drawn in a skimpy outfit. She’s going to have several poses as she’s sitting on the beach, and is designed to look sexy, an extra element of attraction for the slot.

As the game has a lot to do with the fruit genre, the symbols you’re going to see on its reels shouldn’t surprise you. Luckily, they’re mostly tropical fruits, so it’s not as connected to the classics there. The low symbols provide us with images of the Blueberry, Pear, Orange, and Banana. The high symbols show us a Pineapple, Grape, and Apple. Special features come via the Scatter Orb and the Multiplier Wild.